The adoption of building information modeling (BIM) is more prevalent with today’s plumbing and mechanical contractors because of the myriad productivity and profitability benefits. More importantly, BIM has helped the contracting community evolve into implementing digital twin technologies to monitor and maintain buildings through their entire life cycle.

Nearly two-thirds (61 percent) of mechanical piping contractors report that BIM is used on 50 percent or more of construction projects; just over half (55 percent) say BIM is a formal contract requirement for most jobs. The number is similar for plumbing contractors, with 60 percent using BIM on 75 percent to 100 percent of their projects, and 53 percent reporting BIM as a contract requirement for more than half of jobs.

The architecture, engineering and construction industry successfully moved from the manual drawings of piping common a hundred years ago to CAD drawing to three-dimensional BIM images.

“Some contractors realized how BIM could help them early on—much earlier than the designers,” notes Steve Holzer, a BIM/building digitalization expert and principal of HolzerTime, where he produces webcasts and podcasts on the topic. “They figured out they could use these tools digitally to simulate material management movement on a jobsite. And building owners were starting to see the transparency that this digitalization allowed and began demanding the turnover of the model.”

Steve Holzer, a BIM/building digitalization expert, principal of HolzerTime and member of the Digital Twin Consortium.These digital models contain detailed information about each system in the building—HVAC, plumbing, electrical. Building owners began to understand how this knowledge would be useful in maintenance or renovation situations.

“Building owners know that 90 percent of the total outlay for any facility (80 percent on the low end) is after the construction is complete,” he says. “That’s why the total cost of ownership is so important. It’s not only about what it cost to buy a piece of equipment and then install it. But over the life span of it, what was the cost of maintaining it? What was the cost of operation? What were the utility costs? This can only be accomplished digitally.”

Active in the construction industry since the mid-1970s, Holzer was part of the team (vice-chair of the Market Education Work Group) that developed the National BIM Standard—United States (www.nationalbimstandard.org), administered by the National Institute of Building Sciences’ Building Information Management Council (formerly known as the buildingSMART alliance), www.nibs.org/page/bimc.

Through this work, he learned the significance of digitalizing the built environment and what was necessary to accomplish it—real content, not placeholder content.

“True digitalization comes in not just the drawing, but the ability to provide virtualizations of the same model,” Holzer explains. “Instead of having a generic box with a fan in it representing an air handler, why not add information we can use? What capabilities does that air handler have? What is the airflow? What are the performance requirements? What’s the energy consumption?”

Digital twins: From generic to specific

The 21st-century construction industry is moving further along the path to true digitalization of the built environment through a new concept: digital twins.

A digital twin is “a virtual representation of real-world entities and processes, synchronized at a specified frequency and fidelity,” explains the Digital Twin Consortium (www.digitaltwinconsortium.org). “Digital twin technology enables companies to head off problems before they occur, prevent downtime, improve the customer experience, develop new opportunities, drive innovation and performance and plan for the future using simulations.”

“Right now, we usually have multiple systems in a given facility that are not connected,” he notes. “In a real digital twin of a whole facility, you bring these assets together. There’s always a virtual representation of the real entity. We usually stop at a single asset level, so say a pump. It’s part of a fire suppression system, so there’s a digital twin of the system. There are sensors or data involved in feeding back to the central repository; the digital twin is what monitors the alert that went off.”

Using manufacturer data of the specified pump makes the digital model much more accurate. It allows the design team to perform simulations examining how the pump will perform as part of the entire structure in different conditions. It’s a more holistic approach to building design.

While new construction is the easiest path for digital twin technology, it also can be used with existing building stock in a renovation scenario.

“A building could be 75 years old, but it’s still worth it to use today’s tools and harvest its existing condition,” Holzer says. “We can take 3D scans of the structure; now there’s a digital representation that can be used in a simulation to examine how new equipment or systems will affect the space. A building owner could provide a new tenant with a virtual reality walkthrough and sign off on the design for its offices.”

He adds that those in the industry who have traditionally been resistant to technological advances in construction are becoming obsolete. “There’ll always be artisans in this industry, but they’ll be the exceptions,” Holzer explains. “The reality is you’re not going to remain relevant in the industry unless you embrace technologies that provide productivity and profitability.”

Kelly Faloon is a contributing writer to Contractor, Contracting Business and HPAC Engineering magazines. The former editor of Plumbing & Mechanical magazine, Faloon has more than 20 years’ experience in the plumbing and heating industry and B2B publishing. A native of Michigan’s northern Lower Peninsula, she is a journalism graduate of Michigan State University. 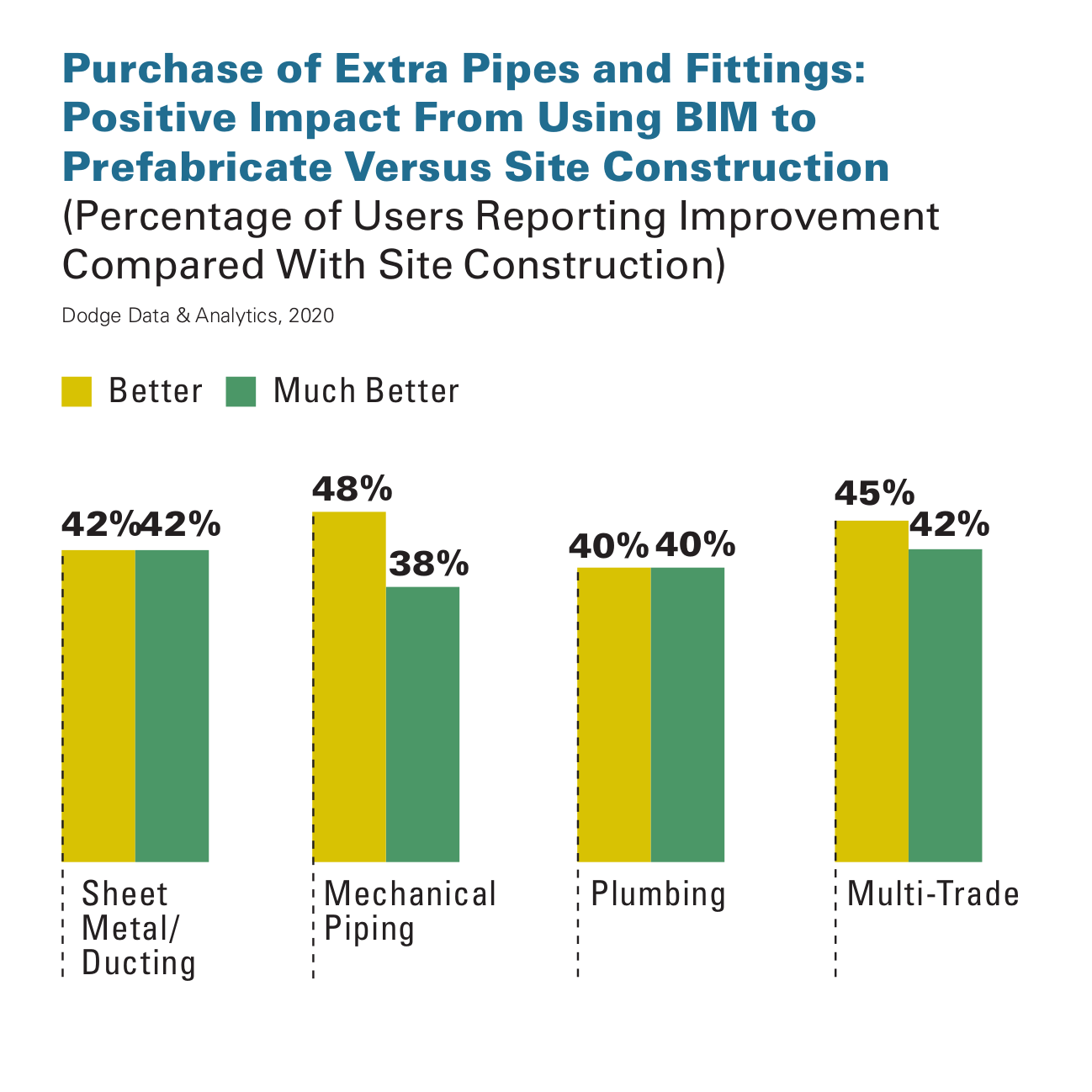 Dodge Data and Analytics’ “The Business Value of BIM for Mechanical and HVAC Construction” SmartMarket Report, 2020Even before the COVID-19 pandemic, prefabrication of MEP building components by plumbing and mechanical contractors was rising. The controlled environment makes it easier to enforce health and safety protocols.

Also fueling that increase is the intensified adoption of building information modeling technology.

“[More than] three-quarters of all contractor respondents using BIM fabricate some percentage of their mechanical assemblies,” notes Dodge Data and Analytics in its “Prefabrication and Modular Construction 2020” SmartMarket Report. “Within three years, virtually all BIM users will be engaged in model-driven prefabrication.”

Specialty trade contractors’ say that improved coordination is the No. 1 reason to use BIM-driven prefab. “Successful prefabrication requires comprehensive spatial coordination between systems and disciplines,” the report notes.

The report also predicts that 99 percent of BIM users will leverage the technology for modular construction within three years.

Investment in Nonresidential Structures Up a Meager 3%