“Some observers may say that the economic recovery that began in May 2020 is neatly in place, but that is simply not true,” said ABC Chief Economist Anirban Basu. “After expanding 33.4% during the third quarter, the U.S. economy expanded only 4% during the fourth, an indication of an economy still beset by uncertainty and interruption.

“Economic momentum has been decelerating rapidly since the summer,” said Basu. “True, fourth quarter gross domestic product benefitted from factors including a surge in demand for durable goods as consumption patterns continued to shift from purchases of services to tangible items. This shift helped fuel purchases of equipment among manufacturers and supported rising exports.

“Other data indicate that the economy may now be shrinking,” said Basu. “As early as October, U.S. retail sales began to shrink. By December, the employment recovery had ended, with the nation losing an estimated 140,000 jobs that month. Key industries will continue to suffer, including airlines, cruise ships, movie theaters, sporting venues, restaurants, traditional retailers and theme parks, among others.

“The near-term outlook for nonresidential construction is not especially optimistic,” said Basu. “Investment in structures was up just 3% on an annualized basis during 2020’s final quarter after declining by 33.6% and 17.4% in the year’s second and third quarters, respectively. Leading indicators of commercial construction, including ABC’s Construction Backlog Indicator and Construction Confidence Index as well as the American Institute of Architects’ Architecture Billings Index, signal tougher times ahead for many contractors. Office, lodging and shopping center segments appear especially vulnerable. Many industry stakeholders and other Americans turn their eyes to Washington in the hope that a meaningful infrastructure package is forthcoming.” 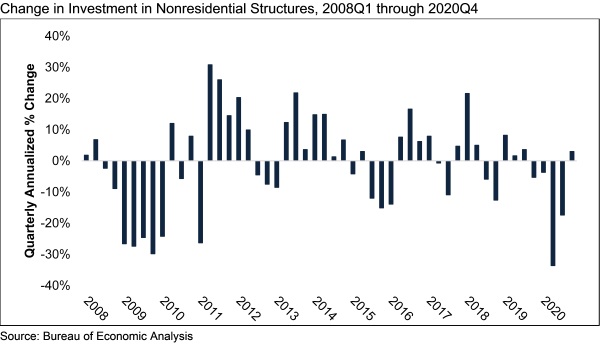 Visit abc.org/economics for the Construction Backlog Indicator and Construction Confidence Index, plus analysis of spending, employment, GDP and the Producer Price Index.