Partnership means sharing and frankly, big manufacturers usually don’t like to share. Their proprietary technologies and processes are their lifeblood, after all. But Milwaukee Tool and Uponor North America managed to find enough common ground—and a strong enough common purpose—to create a real partnership. And the results have benefited not just the companies, but the end-users of their products as well.

It helps that both manufacturers share compatible company cultures. Milwuakee Tool was founded in 1924 in Brookfield, WI, and has a long history of innovation, most famously with its Sawzall reciprocating saw (introduced in 1951). Uponor, founded in Finland in 1918, has likewise pushed the envelope when it comes to plumbing and indoor climate solutions.

The drive of both companies to innovate and improve on their products led each of them into special relationships with plumbing and heating professionals to acquire more (and more accurate) feedback on how their products were being used. In 2008, Milwaukee decided to refocus its business on the plumbing and mechanical trades, what the company calls their “core users.”

“What we understood right away was making the connection for piping systems was really where the plumbing mechanical contractor put their reputation,” says Morgan Sokany, Senior Manager of Product Marketing for Milwaukee Tool. “It’s the one phase of their project that’s by far the riskiest and by far the most important.”

Meanwhile Uponor—which had introduced its PEX piping system and ProPEX expansion fittings back in the 1990s—had also decided to refocus their business; for a while the company had been making their own expansion tools, but soon realized the company’s real strengths were as a manufacturer of pipe and fittings. It only made sense to turn to another company that had tools as their core competency.

“So in the early 2010s we started a partnership with Milwaukee to really partner with the best tool manufacturer out there and really make an even stronger value proposition for our customers,” says Kate Olinger, Senior Marketing Manager for Uponor.

Meanwhile, Milwaukee Tool found itself at the other end of the same equation. “It was clear to us that in order to be successful, you need to partner with the innovators on the pipe and fitting side,” says Sokany, “Uponor really was that missing link for us, the key to taking it to that next level.”

The customers have gotten the best of both worlds, and both Uponor and Milwaukee have leveraged the partnership for new growth.

Milwaukee’s approach to its new PEX expansion tools was to automate as much of the connection as possible to help eliminate any risks or concerns installers might have. One feature of the new generation of tools was an auto-rotate mechanism that ensured an even expansion. As the tool’s design progressed, Milwaukee was able to make the process faster and allow for better access in tight locations. 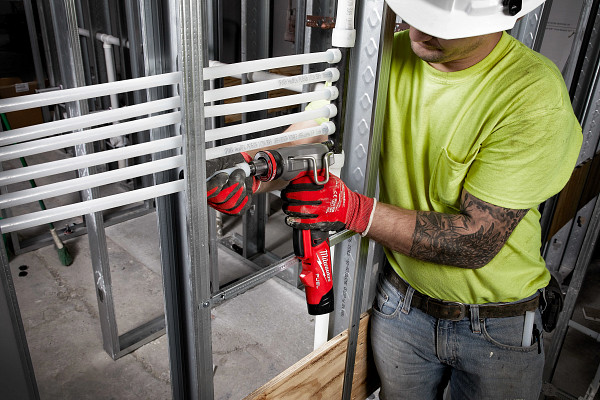 In 2011 Milwaukee launched its the M12 solution, mainly for residential work. They soon followed up with the M18 that expanded up to 1.5”. “That started to bleed into the larger PEX-expansion opportunities for light commercial and commercial as that need for that consistent, reliable, fast connection continue to grow,” Sokany says.

Not long after, in 2012, Uponor expanded its commercial offering with larger diameter pipe and fittings, which in turn meant larger expansion tools. Throughout the development process Uponor and Milwaukee shared customer insights and brainstormed ways to make the installation process smoother and more efficient for the end-users out in the field.

“The consistent theme with both companies in that communication is making sure that we’re super diligent on our testing, both in our labs with our automated processes for making sure that both the tool and the fittings can last,” Sokany says.

Throughout the process the companies have strived (on the one hand) to anticipate the needs of their customers and (on the other) to educate them on the advantages of the new tools and systems. Plumbing professionals can be, at times, resistant to change. Which is, says Sokany, only understandable.

“The plumbing, mechanical contractor, for a lot of reasons, is very specific in what they need, and doesn’t like to change because there’s a lot of risk that comes with change. And I think knowing that is super important when developing any new tool or piping system, because what’s really important is to not only find ways that you can improve the process, but also make sure that you’re not making anything more difficult.”

Olinger finds that winning the confidence of plumbing and piping pros is easier when you have a strong, proven brand, and when you can demonstrate the actual value your innovations are delivering. “We have very traditional customers, but I also think they’re a very pragmatic group too,” she says. “If you can delight them and show them how it will make their lives better, they’ll change.”

The latest outcome from this partnership is Milwaukee’s new M12 Fuel ProPEX Expander, designed for 1” to 1-3/8” expansions. The tool features Rapid Seal heads to provide faster sealing connections in colder temperatures while still maintaining the expected time to insert a fitting. Since more and more contractors are performing work year-round, the cold-weather design could prove to be a big productivity boost.

Other features include Powerstate™ Brushless Motor to deliver sustained peak power even under tough conditions, an extended dual-actuating trigger for better access in difficult-to-reach workspaces, an auto-rotating head for quick, uniform expansions, and built-in LED lights.

Both companies are excited about the launch, and promise new fruits of their partnership in the months and years to come.